​This is a new page and there will be more personal stories to follow in the next few weeks. 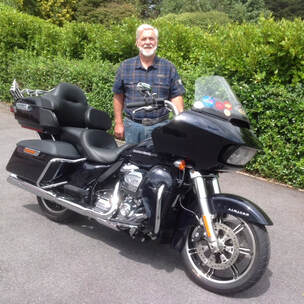 Our previous District Treasurer, Derek Mills is also Provincial Grand Master of the Cornwall Province of The Royal Order of Scotland and Provincial Preceptor of the Westcountry Province of The commemorative Order of St Thomas of Acon.
​He is a keen biker and has been riding since 1966. He has owned Harley-Davidson's since 2002 and is now riding his 8th bike, as you can see from the picture it is a touring model.
He says, Judith and I have now toured many countries on our bikes; France, Belgium, Holland, Germany, Austria, Czech Republic, Luxemburg, Sweden, Norway, Denmark, Spain, Italy and Corsica, I think I've covered them all. Owning a Harley is very rewarding as wherever you go there is always complete strangers who come and talk to you and admire the bike!
As well as belonging to the Harley Owners Group we belong to two Harley Chapters, Plymouth Chapter UK and Cornouaille Chapter Quimper France.
We attend Harley Rallies all over Europe usually three or four a year.  The Harley family is very special, no borders, always a friendly welcome and new friends wherever you go.
This year obviously has been challenging, a new bike on January 1st with less than 5000 miles on the clock, thankfully we did get a whistle stop tour in the Cognac region of France this summer. You will all probably know that in March Judith and I got caught in the first French lockdown, a weeks stay at our French house turned into three and a half months! We are both looking forward to next season with Rallies booked in Brittany, Paris and Liege and a ten day tour of the Alps visiting eight countries and riding all the passes.  ​One of our mottos is “ Keep the rubber on the road and the shiny side up” 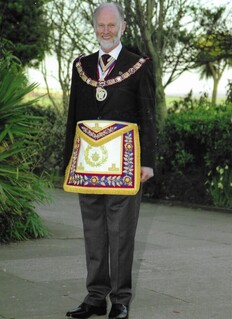 ​Our District Grand Senior Warden this year is W. Bro. Geoffrey Isaac. He is a very well known Mason locally and amongst his other high positions was Provincial Grand Master for the Mark Degree in Cornwall from 2004 to 2014 as shown in the photograph on the right.
A Past Master of Carew Lodge, Geoffrey has been a holder of Craft Grand Rank  for 14 years and is also a member of several other Masonic Degrees.
Outside of Masonry, he worked in a local firm of Solicitors for many years, ending up as a Senior partner and retiring at the age of 70. His interests include being a Governor of 2 local schools and Chairman of Governors of one. This duty led to a meeting with Princess Diana. He is also a keen member of the
​Rame Peninsula Male Voice Choir which has received the Queens Award for voluntary service.
In June Geoffrey celebrated his golden wedding anniversary with Christine and has 2 daughters and 6 grandchildren.

​June Vickery, the wife of Anthony Vickery (our past District Grand Prefect) has finished her course of treatment and remains as always cheerful and positive.

Jim Evans is awaiting further tests and a scan and we wish him well. He has not lost his sense of humour and continues to relate various interesting tales to anyone who chats. While he is at home and unable to attend meetings he always welcomes phone-calls from Brethren. If you are a Cornish member be aware that he will stoutly defend the "other side of the Tamar"!

Bill Lissamer is also restricted to his home at the moment and has difficulty walking. Twice a a day he is visited by a home help and his meals are organised for him. He is being well looked after and in contact with several Brethren. Due to his deafness he does not answer the phone, but always welcomes visitors. If you want to visit him please go around the side of his house and knock on the side door as he will not hear you at the front door.

Nidrel Walsh. Our District Grand Prefect visited recently and found Nidrel up and about and in good spirits. His health is variable though, so as well as the good days, there are occasions when he spends part of the day in bed. Nidrel's sense of humour has not been affected and he still has a wealth of amusing stories for anyone who contacts him.

Peter Blackwell-Smythe.  After spending time in hospital after contracting Covid-19, Peter is now at home and is gradually regaining strength and returning to normal health.

Ed Purkis.  Ed is recovering well after slipping and "banging his head" at home a few weeks ago.