The Allied Masonic Degrees are a group of five Degrees which at one time, were conferred under Craft Warrants.

Nowadays these are known as “Progressive Degrees”, but at one time they were called “Side Degrees” and it was common practice for a group of Brethren to take a Brother to one side after a Craft meeting and confer the Degree on him in a short ceremony, complete with passwords, pass grips etc.
The “Antients” allowed any Craft Lodge to work any Masonic Degree, but since the formation of the United Grand Lodge of England in 1813, only the three Craft degrees and the Royal Arch can be performed in Craft Lodges.
Many other Degrees continued to be worked though and several formed their own Supreme Grand Lodges (eg. Mark Masonry).

In 1879, The Grand Council of the Allied Masonic Degrees was formed to bring together and govern some of the remaining Degrees
These Degrees are:-
ST LAWRENCE THE MARTYR.
KNIGHT OF CONSTANTINOPLE.
GRAND TYLERS OF SOLOMON.
RED CROSS OF BABYLON.
GRAND HIGH PRIEST.
​
More information about these and other Degrees is given on our pages entitled "The Degrees" and "History".

In the Order of the Allied Masonic Degrees, each unit is called a Council and there are now more than 200 Councils worldwide.
In the District of Devon and Cornwall, there are Councils in the following towns:-
Barnstaple, Hayle, Tywardreath, Seaton, South Brent plus 3 Councils in Plymouth.

Candidates are required to be a Mark Master Mason and a Holy Royal Arch Companion in addition to being a Craft Mason.
Regalia worn includes the impressive group of 5 miniature jewels shown below. 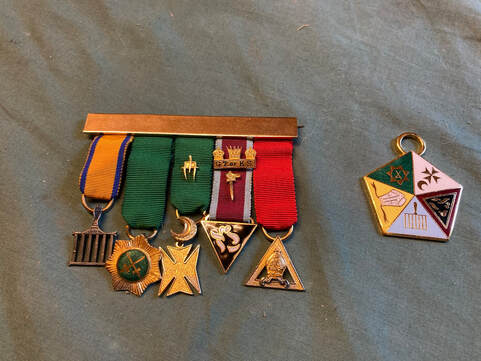 The 5 miniature jewels are shown on the left, but members can choose to wear the  composite jewel shown on the right suspended from a green ribbon instead.